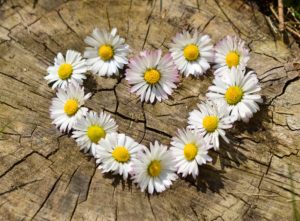 Amrita Svarupa Ca.  This pure love for God is eternal.  It is this sutra from Narada’s Bhakti Sutras that lies at the heart of my practice.

Today when I sat down to think on what is most important for me in a yoga practice, what, if nothing else, would I want to impress upon those around me…what came to mind was this favorite sutra. It is the one that I wrote on a scrap of paper one day, tore out of a notebook and keep on my computer to see day in and day out. A constant reminder, a constant touchstone for my heart and the heart of my practice.

For myself it isn’t God that I am wanting to impress upon others but rather the distinct and transformative mark of bhakti. The essence of pure devotion and the fire within that prayer that has the power to shift and open one up to anything and everything in a beautiful and humble way.

Any practice can begin on a physical level. What a gift it is that we have been given a physical form in which to the universe can experience itself through us. How much we embrace each moment of our life and how we savor those Kshanas (tiniest moments of time) are how we taste the amritam of living.

Amritam is nectar, immortality. According to Narada’s Bhakti Sutras, Nectar makes us immortal. It is a favorite word of the Upanishad-rishis and they use it again and again gently nudging us to attain immortality for the essential nature of the Self with a capital “S” or Atman is Immortality.

I always had this idea that immortality meant to live forever in this form, as I am right now and to go on living in this way for all of eternity. Immortality was never something that I found appealing so my curiosity peaked when over and over in all these ancient texts the idea of immortality seem to be so revered. Was there something I was missing about what immortality really looked and felt like. Why was it something to be sought after, tasted, ingested and transformed into?

I started my search and my eyes were opened wide. It was everywhere I looked – with yogic texts of hatha yoga pradipika, yoga sutras, bhagavad gita, bhakti sutras, religion, film, novels, music..this never ending search for the tree of life. While they all seemed to have their own personal agenda, underneath it was still this secret call that our culture, our humanity was on the hunt for something just beyond our grasp. Some silently leaving society in search, while others created wild and elaborate tales of everlasting life.

It wasn’t until, by happenstance I stumbled upon a book passed onto me from a friend that I read a line (one I had heard for years and dismissed) that stopped my search dead in it’s tracks. A religious reference that has been interpreted over and over again through the years but whose particular interpretation, in this particular book, on this particular day caused me to pause.

The author was breaking down some of the teachings from Jesus from the viewpoint that he was not a man come to convert people to a new religion but rather a wisdom teacher passing on a knowledge channeled through him from a higher source on ways to live a more conscious life. The line, the line I had heard so many times was “The Kingdom of Heaven is at Hand.” Truthfully I had never spent much time dissecting this phrase or really giving much thought to what was being said but on this day with this author he believed “at hand” meant “in the now.”. To live life to the fullest in the moment, in the now, to soak up every second this life has to experience through you is to experience Heaven. It is all around us, right now. We have but to be still, be conscious and live presently to truly see the gifts of the Kingdom all around us.

Taking this to my mat, not just with a general sense of breathing to stay in the moment but breathing rather to experience heaven brought out this beautiful, longing, devotional energy within me I didn’t know I still had access to. This longing I came to learn was the essence of bhakti and it was with bhakti that my journey truly began.

Bhakti is the nature of immortality. This declaration of Amrita Svarupa Ca confirms that Love is God and God is Love. Love is identical with God, hence God’s own nature (immortality) is ascribed to God-Love. Moreover, Bhakti is the object of love. God is Eternal, Infinite and Immortal. This guarantees two things: 1. the love that is directed towards Him becomes immortal and 2. the lover that is thus linked to the Immortal is also immortalised.

The person always facing the sun, knows no shadow or darkness. The person who is in love with God, the Satchidananda-Svarupa, knows nothing but immortality and infinite bliss.

Nectar is regarded as the sweetest thing. Narada assures us that even though we throw away the pleasures of the world, we shall lose nothing; for devotion itself is all sweetness, all delight, all bliss.

Bhakti is all sweetness and is enshrined in the heart of the devotee. What you have, what you experience and what you give are yours and yours alone. A love song between you and the divine.

The Bhakta’s words, thoughts and deeds will be characterised by sweetness. Not an evil thought, nor a harsh word, nor a vicious or harmful action will emanate from him. Let us never forget the unmistakable sign in a true bhakta.